Some pretty incredible news, as I have had my own series commissioned by Channel 4 and so will be off gallivanting around the globe, visiting some of it’s wonders to find out if there is more going on at them than just what they look like. Basically I’m a reluctant traveller because I can’t see the sights so I don’t see the point in going to places that are known for how incredible they look, but some comedian chums of mind will be trying to prove to me that it was worth getting off my couch and going to these places after all. Will they succeed? Who knows, we haven’t filmed it yet.

Check out the press release here.

My mammoth 130+ date national tour now has a final date. I say final, it will be the last date of the tour, although they keep adding new ones in to fill gaps along the way.

The O2 Shepherd’s Bush Empire will be on May 13th and tickets are on sale now!

I’ve done a charity show here some years back with the legendary Ben Elton, but I can’t believe I get to do my own show here now. I’ve seen tons of bands here over the years, so what a bloody way to end the tour!

Imagine my surprise when I returned home from a tour show, opened the BBC News app on my phone to see what was going on in the world, and found that this article about me was the sixth most popular article on there.

BBC article about some of my experiences of doing tv panel shows.

With the lovely people at BBC Studios, I created and hosted a pilot episode for a brand-new comedy panel show for Radio 4. It’s called “You heard it hear first” and was broadcast back in April. I am extremely pleased with how it turned out and it was tons of fun to record. We are waiting to hear whether they want us to make a full series, but fingers crossed – I’ll keep you posted.

You will see me on your tellies again this Crimbo 2022, as I will be making my second Christmas QI appearance, and no doubt dressed like a festive wally.

I bloody love doing this show though, mainly due to the lack of prep required, but also because it’s just tons of fun not having a clue what’s coming up next.

And finally… Lee and me went viral

You may have seen this already as it’s done the rounds a fair bit, but myself and Lee Mack were asked to present a BAFTA at the Royal Festival Hall. So we thought we’d do something a bit different and it went bloody mental online. 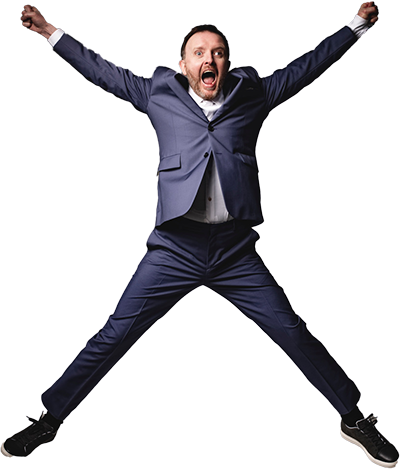